Knights of the Old Republic: War #4 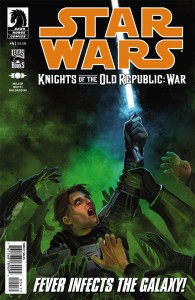 The battle for the future of the Republic is on!

The Republic, the Mandalorians, and even some of the Jedi are corrupt–so Zayne Carrick is going to take matters fully into his own lightsaber-wielding hands. It’s high risk and utterly insane, and the allies Zayne has to work with aren’t exactly what you’d call trustworthy . . . but at least this time he knows that up front!