Knights of the Old Republic: War #3 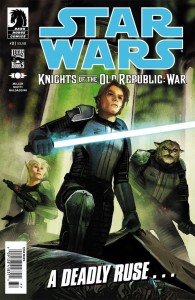 Peace-loving Jedi Zayne Carrick is an unwilling recruit in the war between the Republic and the Mandalorians. When he discovers that his homeworld is about to become the center of a battle zone, Zayne is prepared to do everything to prevent bloodshed—like calling in a favor from an old friend and putting together a complicated ruse!