Knights of the Old Republic #44: The Reaping, Part 2 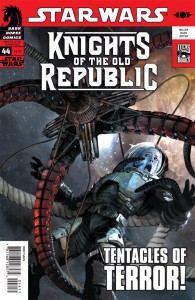 The latest masquerade of the Hot Prospect and its crew has been discovered!

Up against the Crucible, a massive slave-trading organization, Zayne Carrick is having another streak of unfortunate luck. Zayne and Jarael entered a comet-mining facility with the intention of freeing its slaves and taking a knife to the miners‘ profits, but when the Crucible is tipped off that imposters are nudging in on their territory, a death-defying space battle ensues!

Don’t miss this conclusion to the story that exposes a shocking truth about one of KotOR’s most-loved characters!