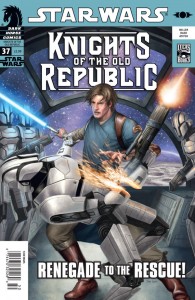 Former Padawan Zayne Carrick’s new life takes a turn for the worse as a con gone wrong puts his friends in a deadly predicament!

Fleecing the corrupt financial exchange on Metellos 3 seemed like a victimless crime to Zayne’s friends Jarael and Rohlan – until they became the victims! Now prisoners of a galactic criminal syndicate, Jarael and Rohlan must find a way to survive long enough for Zayne and his conniving cohort Gryph to rescue them!