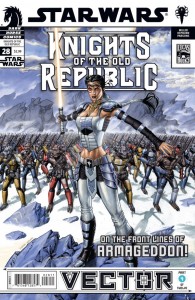 The first phase of the most important Star Wars story of 2008 ends with devastation on an awe-inspiring scale in part four of Vector!

Nearly overwhelmed by an ancient evil run rampant, fugitive Padawan Zayne Carrick, the con-artist Gryph, and the Jedi Celeste Morne have made a choice of cosmic significance, its consequences reshaping not only the course of their lives, but the fate of the entire galaxy! Surrounded by Mandalorians, they face a crossroads where every path demands sacrifice, and no matter what is saved, something else will be lost!