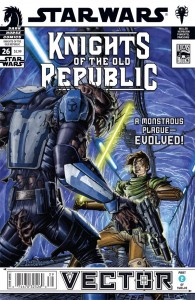 The second part of the biggest Star Wars story of 2008 begins with Mandalorians galore and ends with the arrival of a seemingly unstoppable threat!

Fugitive Padawan Zayne Carrick and his con-artist companion Gryph have fallen into a situation even more dangerous than the one they escaped on wartorn Taris-surrounded by enemies and trapped in close-quarters with a deadly agent of the group who framed Zayne for killing his fellow Jedi-in-training!

The comics event of 2008 continues!