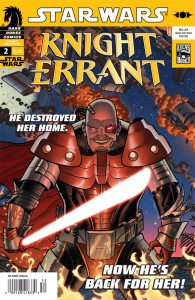 Jedi Knight Kerra Holt thought she was prepared for anything that could happen on the volunteer mission that took her deep into Sith space. But now, trapped behind enemy lines, Kerra looks toward a life without the support of the Republic . . . and if her headstrong ways continue to lead her actions, she may end up without any support at all!

Meet a new kind of Jedi for a new era of Star Wars!