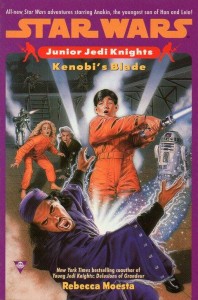 Uldir, Anakin’s classmate at the Jedi academy, wants to be a Jedi more than anything. But he can’t even lift a feather with the Force. He thinks he knows how he can learn faster: the Holocron.

The Holocron is a cube that holds all the secrets of the ancient Jedi Masters. By „borrowing“ it, along with Obi-Wan Kenobi’s lightsaber, Uldir believes he will become a powerful Jedi Knight!

Now Anakin—along with Tahiri, R2-D2, Tionne and the Jedi Master Ikrit—must race across the galaxy to find Uldir. If they don’t, Uldir could be killed. And Kenobi’s blade and the holocron will fall into the hands of a very evil man…