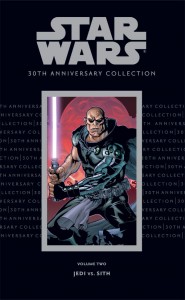 A thousand years before Luke Skywalker embarked on his fateful confrontation with the Death Star, the Jedi Army of Light met the Sith Army of the Shadow on the planet Ruusan for a climactic showdown that would forever change the galaxy.

Before the Battle of Ruusan, there was a mighty Sith Empire that stood against the Republic. Forever after the battle, there would only be two Sith, master and apprentice. Caught in the struggle between the two armies is a group of plucky orphans who little realize the pivotal part they will play in the outcome of the war, or the future of the Sith.

Each month, the Star Wars 30th Anniversary Collection series will bring readers a limited-edition hardcover of the best of Dark Horse’s Star Wars graphic novels. Available only through Direct Market retail outlets, each volume’s print run is limited to initial orders and will not be reprinted.