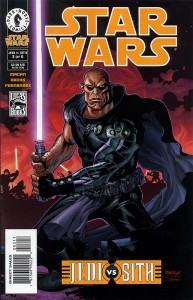 War rages on the battle torn planet of Ruusan. Tomcat and his cousin Bug finally reach the Jedi camp only to find that things aren’t quite as they expected. The glorious Jedi Knights from the folktales Tomcat used to listen to weren’t so common, so… human. And to make matters worse Tomcat’s other cousin, Rain, is still lost in the wilds of Ruusan. As hopes flicker in the Jedi camp, there is conflict in the ranks of the Sith Brotherhood of Darkness. Lord Kaan and Darth Bane clash over how to conduct the Sith campaign — indicating signs of greater trouble to come! Don’t miss out on this third chapter in one of the most exciting Star Wars series of the year!