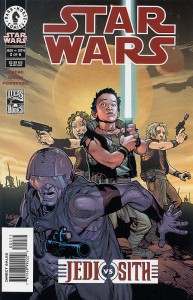 As the war between the Jedi Army of Light and the Sith Brotherhood of Darkness rages, Tomcat, Bug, and Rain — three cousins drawn to the battle in search of adventure — find that they are in for more than they expected. Far more. Brought to the planet Ruusan by a scout gathering troops for the war, the family desperately tries to stay together in the midst of an epic war between good and evil. But individual desires may prove greater than family ties as the three seek their fates among the battlefields of Ruusan and head toward a destiny controlled by the Sith Lord DARTH BANE!