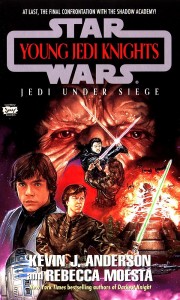 The Jedi Praxeum is under attack from the Second Imperium. The Shadow Academy has arrived on the jungle moon of Yavin 4 along with legions of stormtroopers and Dark Jedi adepts, clouds of TIE Fighters and a fleet of modified warships. In response, the Jedi quickly prepare for war.

Thus begins the battle! This conflict will pit the Solo twins along with their friends and Luke Skywalker against the Dark Jedi Zekk and his superiors Brakiss and the Nightsister Tamith Kai. Who ever wins the battle will decide the fate of the entire galaxy.