Jedi: The Dark Side 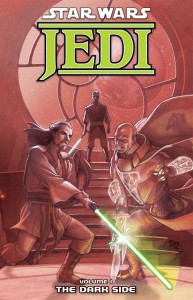 Following a shocking political assassination, young Jedi Master Qui-Gon Jinn is dispatched to prevent the outbreak of a civil war on the homeworld of his Padawan Xanatos–whose father is king. For the headstrong Xanatos, this return to his home has dredged up hidden resentments and passionate emotions. It is a mission that will lead Qui-Gon into close contact with the dark side and start him on a quest that will have a major impact on the future of the Jedi Order!