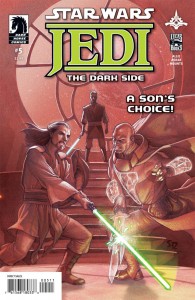 Civil war has broken out on Telos IV. As the governor rallies his military, Jedi Qui-Gon Jinn struggles desperately to uncover the reason for the planet’s unrest, in hope of stopping the war . . .

But Qui-Gon’s troubled Padawan isn’t helping: his homecoming to Telos has been anything but happy, and the recent events–including the horrific death of a family member-have fueled his growing anger. This time, though, Qui-Gon is the target!