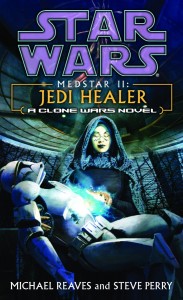 Even the Jedi abilities of Padawan Barriss Offee have been stretched to the limit. Ahead lies a test for Barriss that could very well lead to her death– and that of countless others. For the conflict is growing–and for this obscure mobile med unit, there’s only one resolution. Shocking, bold, unprecedented, it’s the only option Jos and his colleagues really have. The unthinkable has become the inevitable. Whether it kills them or not remains to be seen.