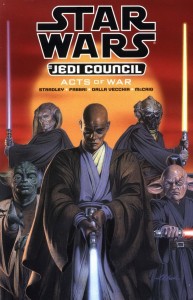 Even in the days before the shadow of the Phantom Menace falls upon the Republic, the rule of the Senate is no guarantee of peace. When conflicts arise, it is the duty of the Jedi Knights, under the guidance of the Jedi Council, to protect the innocent and restore order. When the warlike Yinchorri threaten the stability of the Republic, a Jedi task force led by Mace Windu and including Qui-Gin Jinn and Obi-Wan Kenobi is sent to the Yinchorri system to settle matters, and they soon find themselves facing overwhelming odds on three different worlds. Collecting the four-issue series.