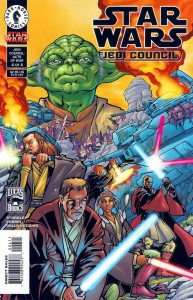 The Council’s quest nears its end as the hiding place of the Yinchorri High Command is at last revealed. But the Yinchorri aren’t about to surrender without a fight, and Jedi blood has already been spilled. How many lives — on both sides — will Jedi Master Mace Windu risk to bring the warlike aliens to justice? A handful of lightsabers is all that stands between a relatively peaceful Republic and galactic war. Action and heroism in the grand Jedi tradition!