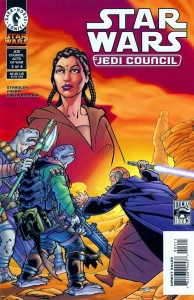 What began as Mace Windu and the Jedi Council’s covert search for the secret government headquarters of the warlike Yinchorri has turned into a confrontation with the military might of an entire planet. The result is a full-scale battle pitting a vast army of heavily-armed alien warriors against but twelve lightsaber-wielding Jedi. Pity the poor Yinchorri!