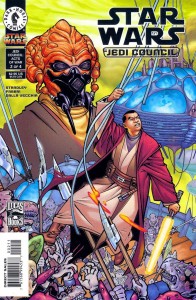 The Jedi task force sent to the Yinchorri system is met with a hostile reception, and they soon find themselves facing overwhelming odds on three different worlds. Meanwhile, back on Coruscant, a Yinchorri suicide squad attacks the Jedi Temple itself, fighting to the last being and taking as many Jedi with them as they can. Behind all of these events, Yoda detects a controlling hand, but he cannot detect its source…