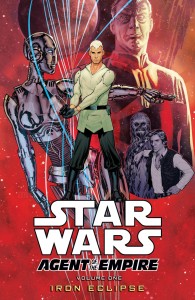 Imperial power is at its height. With Palpatine on the throne and his chief enforcer, Darth Vader, leading fleets of Star Destroyers and legions of stormtroopers across the galaxy, the Empire is an unstoppable force for order and peace.

But not every political problem requires military might; not every negotiation depends on a show of force. Sometimes all diplomacy needs to succeed is the right man, in the right place, with the willingness to get the job done. No matter what it takes. Collects Star Wars: Agent of the Empire—Iron Eclipse #1–#5.