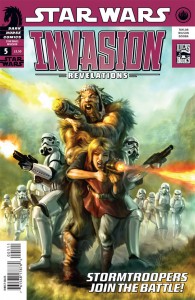 Queen Nina and Princess Kaye have successfully rescued the refugees from the Battle of Shramar, but the Yuuzhan Vong invaders may still have another win for their tally. Or is there another revelation in store?

Meanwhile, on Coruscant, Jedi-in-training Finn Galfridian finds that in trying to prevent an assassination, he may be complicit in one! The next revelation may be about Finn’s new mentor!