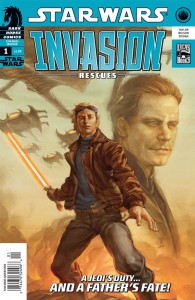 The Yuuzhan Vong invasion spreads death and destruction across the galaxy, leaving behind ravaged worlds with little hope of survival . . . Artorias, the homeworld of the Galfridian family lay in the path of the Yuuzhan Vong armada-and now, though separated, Finn, Kaye, Nina, and Caled work to fight the invaders with the hope that one day they will again be together on their peaceful planet.

Finn studies at the Jedi temple with Luke Skywalker and the grown Jedi children of Han Solo and Princess Leia! Kaye and Nina use a Yuuzhan Vong slave ship to attack their former captors! Caled raises forces on Artorias-not knowing the danger from one of his trusted allies!