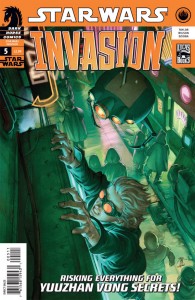 The Yuuzhan Vong invasion of the galaxy is spreading quickly. Prince Finn Galfridian, whose planet of Artorias was taken and his family separated by the Vong, is training as a Jedi with Luke Skywalker to prepare himself to save his family and lead his surviving people.

Not surprisingly, the other members of the royal family have been working to save themselves! Finn’s mother and sister Kaye are fighting against the Vong’s bioengineered killing monsters to escape imprisonment, and if his father, Caled, is still living, he will be leading resistance on Artorias. With hope, Caled lives, and will still be fighting when Finn arrives with aid!