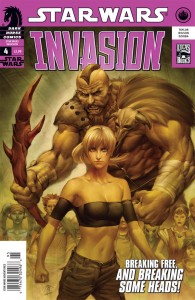 Twenty-five years after the events in A New Hope, the relentless assault by the alien invaders known as the Yuuzhan Vong has plunged the galaxy into war. But word has come of a possible intelligence coup for the New Republic!

Young Finn Galfridian joins Leia Organa and her children aboard the legendary Millennium Falcon for an undercover mission to a notorious refuge for pirates and smugglers. Meanwhile, Finn’s sister Kaye, held prisoner aboard a Yuuzhan Vong starship, is about to show the invaders that the galaxy is not defenseless!