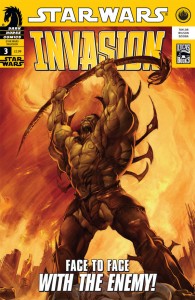 The forces of the New Republic, led by Jedi Master Luke Skywalker, are determined to prevent the Yuuzhan Vong from establishing a beachhead on the planet Rychel, but they are not prepared to face the monstrous living weapons of their enemy.

For Finn Galfridian, who has already lost his family and witnessed the enslavement of his own world, this is his first taste of war — and Luke is afraid it may be the boy’s last. When face to face with the alien invaders, will Finn succumb to his anger, or follow Skywalker’s orders?