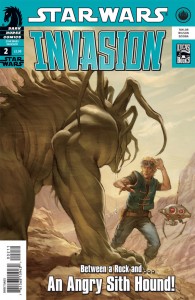 Jedi Master Luke Skywalker and the soldiers of the New Republic were able to pull off a last-second evacuation of some of the civilian refugees from Artorias, but for Finn Galfridian it was too little, too late. Finn’s mother and sister have been taken prisoner by the Vong, and his father was left behind with a delaying force to allow the refugees to escape.

Now Finn finds himself at the new Jedi temple on Yavin 4, where he is to undergo training — but what he really wants is to get back into the fight!

The Yuuzhan Vong invasion has begun!