Infinities: The Empire Strikes Back #4 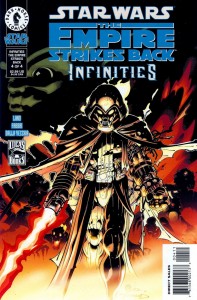 Dagobah is a mysterious place. Beneath the heavy canopy of ancient trees lies a strange jungle inhabited by creatures in caves and swamps not seen elsewhere. Dagobah is also home to the greatest living Jedi Master, Yoda. It’s here that he has trained young Leia Skywalker to take her rightful place in the Jedi Order. Though she has quickly learned what he’s taught her, she is not a Jedi yet. She has two important final tasks to complete. Yoda, too, has a final mission. His home is about to become a battleground, as he faces the fiercest soldier the dark side has ever commanded: Darth Vader! In a mortal confrontation on an astral plane, these warriors will clash for the fate of the universe!