Infinities: The Empire Strikes Back #3 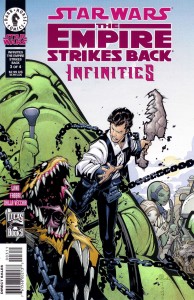 Han Solo is as skilled, clever, and resourceful as they come, but this time even HE may have bitten off more than he can chew. With Jabba the Hutt’s bounty on his head, there doesn’t seem to be a place in the known galaxies where he can hide for long. But, Han Solo is smart. That’s why he comes clean and plans to pay Jabba back what’s owed from a botched smuggler’s run. Enter a shrewd Devronian with a taste for money that decides Solo’s a prize that’s too good to pass up. And since this mercenary is working for Jabba directly, it doesn’t bode well for Solo and Chewie. What fate will await them in the dark, odorous prison-depths of Jabba’s palace? And what infamous, uninvited guest will drop by and completely alter the chase for the last living Skywalker?