Infinities: The Empire Strikes Back #2 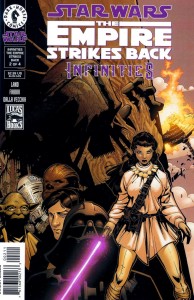 In the bizarre Star Wars Infinities universe, nothing is set in stone, and ANYTHING can happen! Our heroes deal with the aftermath of Luke Skywalker’s death and a catastrophic attack on the Rebel Alliance’s Hoth base as Boba Fett arrives at Cloud City early to cut a deal with Lando. Thinking that Fett’s boss is Jabba the Hutt, Han and his Rebel allies leave Cloud City behind…and you won’t believe what fate has in store for the city in the clouds! Searching for a Jedi Master in the jungles of Dagobah, Han Solo thinks that he’s on his way to becoming a Jedi Knight…but the Force has big plans for someone else! This mini-series blows the cap off everything you thought you knew about Star Wars: Episode V! Containing more twists and turns than you’d ever expect and culminating in an uncanny battle between two of the most famous — and infamous — living Jedi Knights ever to pick up a lightsaber, this series features incredible covers by Chris Bachalo (Steampunk’s). Don’t miss the most startling take on The Empire Strikes Back you’ll ever see!