Infinities: Return of the Jedi 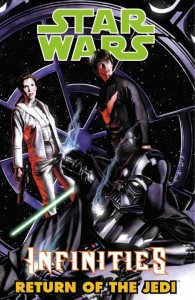 In the topsy-turvy Infinities universe, a single, seemingly insignificant event can alter the fate of the galaxy. Continuing with the tradition begun in Star Wars: Infinities — A New Hope, we now give Return of the Jedi the Infinities treatment! When the plan to rescue Han Solo from Jabba the Hutt falls apart, Princess Leia, Lando Calrissian, and Chewbacca embark on another rescue mission that puts them into direct conflict with Boba Fett. Meanwhile, Luke’s late arrival on Dagobah ends with him being captured by Darth Vader and the Emperor, just as the second Death Star is about to go on-line! Will the return of the Jedi become the end of the Jedi? The surprising climax is as exciting as that of the film on which it is based, but different from anything Star Wars fans have seen before! Collecting the four-issue miniseries.