Infinities: Return of the Jedi #1 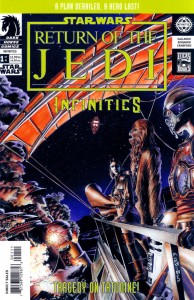 Welcome to the third installment of Infinities, the series that asks the question, „What would happen if you changed one little thing from the story in the film?“ In this version of Return of the Jedi, an accident puts C-3PO out of commission, and he is unable to act as Jabba the Hutt’s interpreter during his negotiations with Leia (disguised as the bounty hunter Boushh) for her „prisoner“ Chewbacca. One misunderstanding leads to another, and before you know it, thermal detonators are flying and everybody’s shooting! When the smoke clears, Boba Fett has reclaimed Han Solo’s frozen body, Leia has commandeered Jabba’s sail barge, and Luke is going to be late for an important rendezvous on Dagobah…

See Return of the Jedi as it might have happened! All of the action of the film–only different!