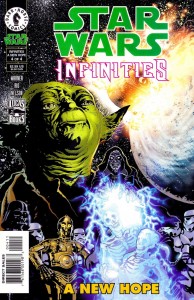 In this altered Star Wars timeline, Luke Skywalker fails to destroy the Death Star, and the Rebellion is seemingly crushed. Overcoming his raging emotions, Luke escapes to become a Jedi Master after finding Yoda and completing his training. Imperial forces thrive throughout the galaxy, and Leia Organa undergoes a dark transformation while Luke plunges headlong into the heart of the Empire in a final attempt to rekindle the Rebellion. Brother battles sister, and a dying Jedi Master squares off against an entire world in this final issue. Star Wars: Infinities… the possibilities are endless!