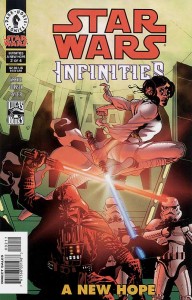 Welcome to a Star Wars you never imagined, a Star Wars shattered, a Star Wars where the possibilities are ENDLESS! In a timeline altered by tragedy, Luke Skywalker valiantly attacks the Death Star, yet his torpedoes miss their mark! This one act has incredible ramifications on the entire Star Wars universe, as the Death Star maintains its deadly power, Leia becomes Darth Vader’s prisoner again, and Luke narrowly escapes a barrage of TIE fighters to explore the strange surface of Dagobah with Han Solo and Chewbacca! The Rebellion’s hopes for freedom are crushed, and the Emperor takes the planet Coruscant as his Imperial Throneworld. These are just a few of the massive changes in store for the Star Wars universe in the Infinities series!