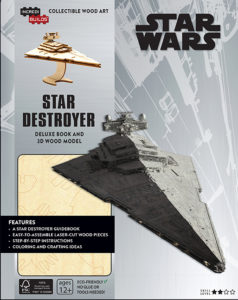 Build your own Imperial Star Destroyer with this IncrediBuilds: Star Wars model kit, featuring a full-color book packed with facts and trivia on the evolution of this fearsome starship.

Build and color your own 3D model of the Imperial Star Destroyer!

The Galactic Empire’s infamous capital ship is yours to build and customize with this interactive Star Wars wood model set. The accompanying 32-page book gives readers the full run-down on the evolution of the Star Destroyer, from the antecedent versions used in the Clone Wars, through their major role in the Galactic Civil War, to their function under the command of the First Order. The ship’s full technical capabilities are explored through fascinating facts and exciting imagery, and amazing behind-the-scenes information illuminates how the filmmakers behind the Star Wars saga brought Star Destroyers to the screen throughout the years. The wood model is easy to assemble and snaps together to form a dynamic displayable version of the Imperial Star Destroyer that fans will love!