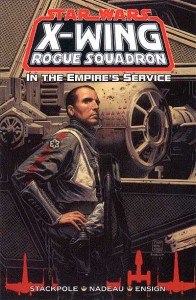 Wedge Antilles is the premier X-wing pilot of the Rebel Alliance, and his Rogue Squadron is the most feared in the Rebel fleet. But the Empire has its top guns too — the merciless Imperial 181st Fighter Division led by Baron Fel, the man who trained Wedge and many of Rogue Squadron’s best pilots. Wedge and the Rogues will get every opportunity to test that training when they are dispatched to square accounts with Rogue Squadron, once and for all!