Heir to the Empire #1 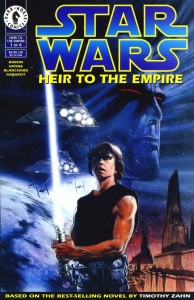 The tyranny has ended. But what will take its place? It is now five years after Return of the Jedi. Leia and Han are married and have shouldered heavy burdens in the government of the New Republic. And Luke Skywalker is the first in a hoped-for new line of Jedi Knights.

But thousands of light-years away, the last of the Emperor’s warlords, Grand Admiral Thrawn, has taken command of the remains of the Imperial fleet. Thrawn has made two vital discoveries that could destroy the Rebel Alliance’s New Republic. The tale that emerges is a towering epic of action, invention, mystery, and a spectacle of galactic scale — in short, a story that is worthy of the name Star Wars.