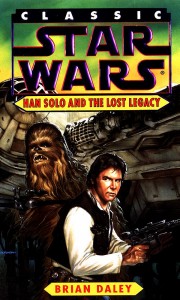 The fabled hoard of the mad tyrant Xim was vast–a king’s ransom beyond imagining. It was also, as far as Han Solo and Chewbacca were concerned, strictly legendary. But when a little misunderstanding set the deadliest gunman in the galaxy on Han’s trail, a secret expedition to almost any place became highly desirable.

Yet within hours of landing on the planet rumored to hold the treasure, Han’s beloved spacecraft, the Millennium Falcon, was hijacked, and his party was forced to contend with deadly assassins and an army of killer robots.

This was no way for a pair of honest smugglers to make a living . . .