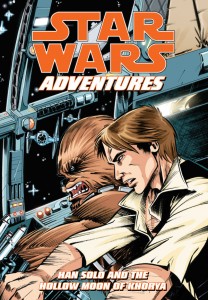 No one ever said being a smuggler was easy!

Before they ever met Luke Skywalker or Princess Leia, Han Solo and Chewbacca had already lived a lifetime of adventures. In this action-packed tale, Han and Chewie are caught between gangsters and the Empire, and their only help is Han’s former partner — who may be worse than either!

Star Wars Adventures is a new series of graphic novellas designed for readers of all ages!