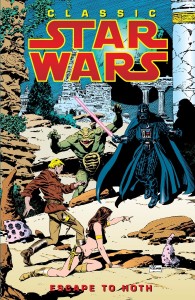 After the initial euphoria of the Rebel Alliance’s first major success — the destruction of the dreaded Imperial battle station known as the Death Star — the Empire began to rally. It had been staggered, but not destroyed. Even Darth Vader still lived. And he sought to avenge himself upon the still-ragtag forces of the Rebel Alliance. This is the story of how Luke, Leia, Han, Chewbacca, and the droids graduated from the triumphal reception at the conclusion of Star Wars: A New Hope to their new lives as hardbitten guerrillas fighting against the tyrannies of a still-dangerous Empire in The Empire Strikes Back.