Empire’s End #2: Rage of the Emperor 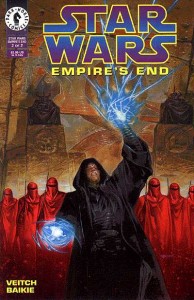 Death stalks Emperor Palpatine! The Emperor’s aging process is rapidly accelerating and his doom is foretold by the oracle stone. The key to his problem, the solution to his aging, is close at hand; Han and Leia’s youngest child, Anakin, can reverse the process. Palpatine must kidnap young Anakin and claim the boy’s body as his own! But for the sake of their son, and for the sake of the galaxy, Han and Leia cannot let that happen — even if it means losing their own lives.