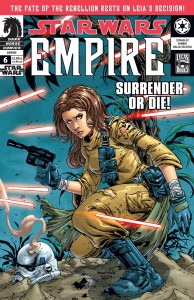 The time: days just prior to the events in Star Wars: A New Hope. On a visit to a planet about to be enslaved by the Empire, Princess Leia comes to the fateful conclusion that impassioned speeches and diplomatic missions may not be enough. Sometimes, in order to prevent the death of innocents, one must pick up a weapon and fight — and kill, if necessary — those who would use force to exert their will over the helpless. A crucial moment in the life of everybody’s favorite Star Wars heroine — and one that very nearly ends the Rebellion before it has even begun!