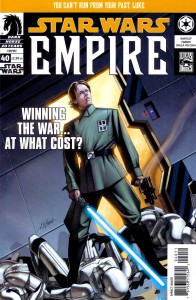 The jig is up!

The Rebel intelligence operatives inside the Imperial base on Kalist VI have been discovered. Yet, even with their cover blown, this stalwart crew of Alliance heroes is determined to follow through with their mission no matter what the cost! As Imperial forces close in swiftly and mercilessly, will this band of Rebels need to be rescued from their own rescue mission? Find out in this explosive conclusion to „The Wrong Side of the War.“