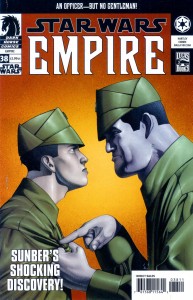 Dissent in the ranks! Janek Sunber finds himself at odds-and at gunpoint-with his fellow officers over the treatment of Imperial prisoners. Hardly an auspicious start to his new assignment, and made all the worse because the internal conflict blinds the Imperials to the presence of Rebel infiltrators in their midst!

But the biggest shock to Sunber-and the Rebels-is yet to come, from a most unexpected quarter! Allegiances are strained, identities are revealed, and a major strike against the Empire is in the offing. An issue that should not be missed!