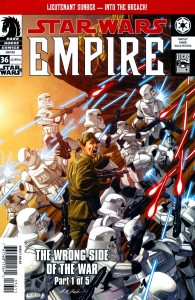 Devotion to duty has put Imperial Lieutenant Janek Sunber once more on the front lines. First as part of an intense ground battle, where the last of a planet’s freedom fighters are desperately holding on, then as a glorified prison guard at an Imperial base where prisoners are put to work for the benefit of the Empire.

It’s not the career Sunber imagined he’d have in the Imperial Infantry, but a Rebel surprise attack on the base may give Sunber another chance to distinguish himself–or die trying!