Empire #30: In the Shadows of Their Fathers, Part 2 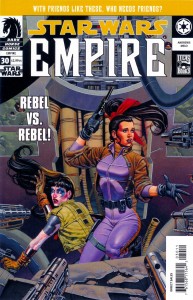 Luke, Leia, and their companions have been taken prisoner on Jabiim by the very Rebels they’ve come to help. Worse, the only people from whom they could expect any help-X-wing pilots Wedge Antilles and Hobbie Klivian-are up to their necks in trouble themselves. To top it off, an Imperial fleet is headed for the planet with orders to kill or capture everybody!

Luke thinks he can find a way out of their current predicament if he can just figure out what it was that his father-Jedi hero Anakin Skywalker-did twenty years ago that caused this whole mess!