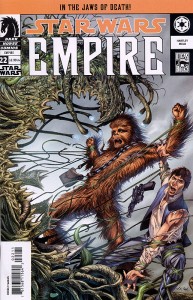 The fear of Imperial discovery sends the ships of the Rebel fleet scrambling for the far corners of the galaxy. Han, Chewie, Leia, and a young soldier named Deena Shan, on board the Millennium Falcon, end up near a dark jungle moon from which they receive a distress call. Investigating, they discover the remains of a tragedy dating from the Clone Wars, and a still-living threat that could claim them all!

Fighting alongside the Heroes of Yavin, Shan learns that the Rebellion, and even survival, mean so much more than she imagined when put in the context of friendship and sacrifice.