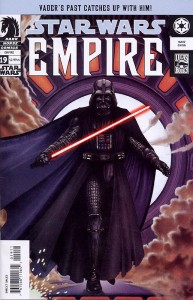 Having failed to locate the Rebels’ new base after the destruction of the Death Star, Vader sets out to redeem himself by strong-arming his underworld contacts for information about the Alliance. But other deeds from Vader’s past return to haunt him as a group of aliens attempt to kill the Sith Lord as revenge for a slaughter he perpetrated on their homeworld.

Fighting vengeful aliens is all in a day’s work. The real challenge for Vader is coming to terms with the man he once was, and the “monster” he has become…