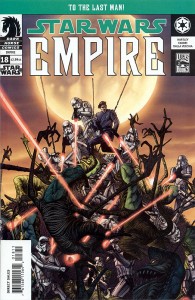 Thousands of angry alien Amanin versus less than sixty Imperial troops. So much for being „the glue that holds the galaxy together.“

The Imperials are doomed, but newly promoted Captain Janek Sunber is determined that they will sell their lives dearly. If only some of his fellow officers exhibited the same courage, they might have a chance. But is it bravery, or foolhardiness that drives Sunber? And, if they all die, who will tell the story of their sacrifice? Who will record the glory of their final stand?