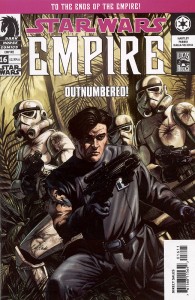 He may have washed-out as a pilot at the Imperial Academy, but Lt. Janek Sunber has found a new home in the infantry. Hoping for a post on a world where he could see some action against the Rebels, he instead finds himself on the jungle world of Maridun as part of a regiment overseeing the construction of a new base. But just when he’s resigned himself to a long, uneventful tour of duty, things heat up. The alien natives are restless, and on the hunt for human skulls! Sunber is about to learn one of the truths about the infantry: all service is sacrifice, and in the infantry that sacrifice is usually in blood!