Edge of the Empire: Special Modifications 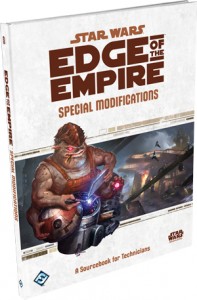 Without the brilliance of Technicians, the Star Wars galaxy would be unrecognizable. Their work has created sentient artificial beings, put the most distant systems within reach via hyperdrive, and defined the ways that wars are fought. Yet even with such advanced technological marvels, there is no replacement for good, old-fashioned, spur-of-the-moment ingenuity, particularly inthe Outer Rim. There, Technicians must be as resourceful as they are intelligent, in order to invent solutions for the myriad troubles they daily face.

Special Modifications, a sourcebook for the Star Wars: Edge of the Empire roleplaying game, brings new specializations and signature abilities to the Technician career. Its 96, full-color pages also include new playable species and copious amounts of gear including cybernetics, slicing tools, construction tools, and remotes. Finally, the book contains detailed guidelines for crafting devices, weapons, and droids of your own invention, as well as new slicing actions and expanded rules for running slicing encounters in your roleplaying adventures.